Counterspin: VMRO-DPMNE “Can’t See” that there are 600 Less Active Covid-19 Cases in 3 Weeks

Although it is said that everything is allowed in politics, it is not allowed to spin with the numbers related to the health, life and death of the citizens for political purposes. VMRO-DPMNE, due to the spins it uses in communicating with the public about the corona crisis, does not place the most important facts, and thus grossly distorts the truth

After the Minister of Health, Venko Filipče, TV interview on the topic of dealing with the coronavirus, the largest opposition party, VMRO-DPMNE, issued two statements in a short period of time that were а complete spin:

Spin: The Republic of Macedonia is a black hole in the region and in Europe in terms of the number of infected and dead from the corona virus.

The citizens are left alone, and Zaev and Filipče only count the lost lives and lie that the epidemic has been overcome and that they have the situation under control.

Zoran Zaev and the Government led by SDSM cannot devise a plan to deal with the consequences of the corona virus.

Counterspin: The announcement/statement of the largest opposition party, VMRO-DPMNE, delivered on 7. August 2020 regarding the management of the corona crisis, it is a complete spin, a twisted truth regarding the dealing with the crisis from a health aspect, but also from an economic point of view. This announcement is a continuation of the spin announcement published on 6. August 2020, and both were prompted by the TV interview of the Minister of Health Venko Filipče on one of the national TV stations.

In both statements – the first directed directly at Filipče, and the second directed at the leader of SDSM, Zoran Zaev – the main and most dangerous spin refers to the situation in the country, which is assessed as apocalyptic and as the worst in the region and in Europe.

From the numbers of newly infected and dead, VMRO-DPMNE brings out such “facts” and using spins communicates with the public that “we are living the worst possible scenario” and that under the rule of SDSM, and, above all, because of Zoran Zaev, Oliver Spasovski and Venko Filipče, the citizens of the country were left on their own.

Moreover, VMRO-DPMNE and its leadership, as in every spin, do not state very important facts, which would give a true picture to the public of where is situated RNM in regional, European and world context in dealing with the crisis.

THE TREND IS GLOBAL, NOT DOMESTIC

Fact number one, which is the most important, shows that the increase in the number of newly infected and deceased patients is a trend that is observed in most countries in the region and in the world, with small exceptions, such as Sweden, for example.

Only the least informed citizens do not know that, and everyone else is aware that on 7. August 2020, for example, the number of infected people in the world is over 19 million people with over 718 thousand deaths. If you look at the graphs of the most widely cited portal for Covid-19 statistics, Worldometer, you will see that the curves of newly infected and deceased patients are constantly moving upwards from the beginning of the pandemic in January until today. In the same way, as in the country, a small decline was observed in the world sometime in mid-May, but since the beginning of June, when all countries, including N. Macedonia, began to lift the restrictions on movement, above all, the numbers began to grow: 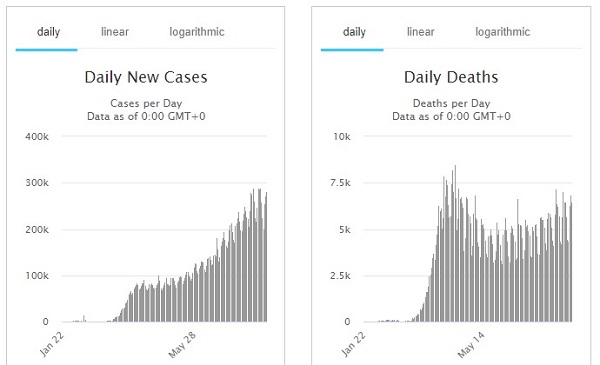 Graphs of cases of newly infected and deceased by Covid-19 every seven days. Source: Worldometers

Since the same trend in the same period is very visible in the region, it becomes clear that by omitting this most important fact, VMRO-DPMNE spins in order to give the public the wrong impression that the country is in chaos in dealing with the corona crisis, which, on the other hand, can cause panic among the population and complete distrust in public health, and thus further deterioration of the situation.

THE NUMBER OF ACTIVE CASES HAS DROPPED SIGNIFICANTLY

The second fact about the number of cured and active patients is also a spin. The truth is that the percentage of cured is high and the number of active cases is decreasing in the last three weeks, but VMRO-DPMNE does not count them as a statistic in any of its statements.

So, with a spin, they try to prevent the public from registering at least the current trend in N. Macedonia, and that is that the number of active cases on 7. August 2020, is lower by about 600 cases and has dropped to 3,400 people, compared to over 4000 active cases of people infected with the coronavirus on 22 July 2020. This trend of slight calming of the epidemic in the country is slowly being registered in Serbia, example, while in some other countries in the region the situation is different, not to mention Kosovo and Bosnia and Herzegovina. Because if in the country the percentage of newly infected on average for two months is about 10 percent of the number of tests, in Kosovo, for example, it is between 40 and 50 percent, and it is also dramatic in Bosnia and Herzegovina.

THE NUMBER OF TESTED HAS INCREASED

Furthermore, the number of people tested in the country has increased significantly compared to the period before and after June 2020, so, with a maximum capacity of about 2,000 tests per day, health authorities are able to detect as many newly infected people, of which about 30 per cent are completely asymptomatic, which in turn contributes significantly to reducing the spread of the virus.

It can already be noticed that the situation from 7. August 2020 shows that in N. Macedonia more tests are performed per one million people, unlike in Bulgaria and Bosnia and Herzegovina or Albania, for example. In our country, that number is almost 53 people per million, compared to 42 in Bulgaria, 45 people in Bosnia or only about 13.5 people in Albania.

It is true that the death toll in the country is higher compared to the region and even part of Europe. But, as Filipče says, the numbers themselves, without a proper context, mean nothing.

Thus, the explanation of the health authorities that a large number of patients died between the 3rd and the 5th day of treatment must be taken seriously, which indicates the fact that they were admitted for treatment in a very serious condition. This, in turn, points to the fact that sick citizens came to the hospital when their symptoms became such that they were defined as patients with a severe or critical condition, after which, the chances of survival are drastically reduced.

Second, if we compare these figures per one million of the population, it can be seen that N. Macedonia with 248 deaths as of 7. August 2020 is worse than the countries in the region, but, for example, it is better than Belgium, where 850 people per million died, Great Britain with 683 deaths, Spain where the number is 610, Italy with 582, Sweden with 571 people per million inhabitants, etc.. . .

More arguments and facts can be presented to unmask the spins of VMRO-DPMNE regarding corona crisis management. But no matter how many arguments are added, the impression about the spins being used in these statements is only growing. Although no one, not even the authorities claim to be perfect in dealing with the spread of the epidemic, and although in politics “everything is allowed”, it is still not allowed to spin with figures related to health, life and death of the citizens for political purposes.

This article was created within the framework of the Project to increase the accountability of the politicians and political parties Truthmeter implemented by Metamorphosis. The article is made possible by the generous support of the US non-profit foundation National Endowment for Democracy (NED). The content is the responsibility of its author and does not necessarily reflect the views of Metamorphosis, the National Endowment for Democracy or their partners.
вмро-дпмнеЗоран Заев
0
Share FacebookTwitter
You might also like More from author