By publishing unconfirmed, unchecked and misleading information about former Macedonian prime minister Nikola Gruevski’s flight to Hungary to avoid a 2-year prison sentence, many Balkan media outlets have helped create confusion and mistrust among the general public. The main source of the confusion was the re-publishing articles back and forth between Macedonian, Hungarian, Serbian and Albanian media without basic journalistic verification.

According to Balkan Insight, it is now known that Gruevski passed illegally from Macedonia into Albania, and was then transported in diplomatic vehicles through Montenegro and Serbia to Hungary by staff from the Hungarian embassies in those countries.

Flying on a non-existent airline?

One of the most influential pieces of disinformation came from the formerly reputable Serbian newspaper Politika, which on November 15 published an article claiming Gruevski had “escaped” on a Malév Hungarian Airlines flight from Tirana, Albania’s capital, to Budapest. Conveniently for the Serbian government, which has close ties to the Macedonian and Hungarian populists involved in the operation, the Politika story conveniently omitted Serbia from its description of the route taken by the fugitive.

While many Balkan media republished the story unmodified, some took the exceptional step of assessing and debunking the information within. Macedonia’s Meta News agency pointed out, for instance, that Malev Hungarian Airlines had ceased operations back in 2012. 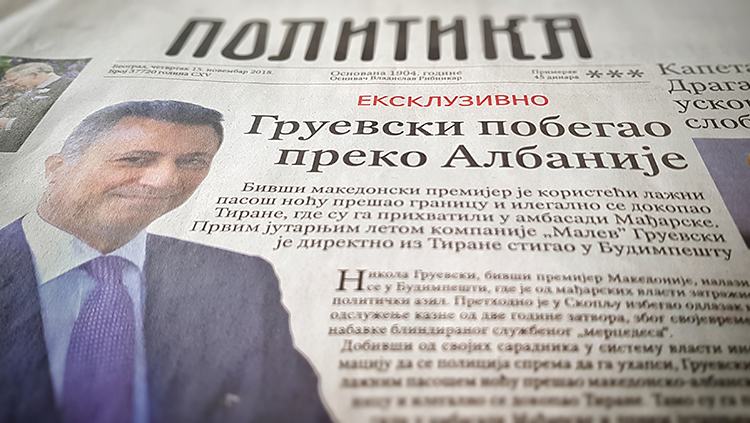 Illustration of the fact-check of Politika’s article “Exclusive: Gruevski escaped via Albania” by Raskrikavanje.rs, used with permission. It combined true (he indeed was in Albania) and false claims (he flew instead of passing by car through Serbia) to throw off the public off the scent.

Serbian media fact-checking site Raskrikavanje.rs further debunked the Politika article by reporting that the only flight from Tirana to Budapest on any airline on November 13 was late in the evening, and the airline was the low-budget Wizz Air. As Gruevski had announced on Facebook that he was in Budapest at around 13:10 hrs that day, it would have been impossible for him to have taken the Wizz Air flight, or any flight from Tirana.

The article in question was removed from Politika’s website without explanation. However, the Macedonian website Critical Thinking for Mediawise Citizens  – CriThink retained a screenshot of the page as part of their fact-checking. Besides analyzing the information in the story, CritThink pointed out that the anonymous author of the misleading article had not cited any sources to support their claims.

For not a single piece of information in the article, for not a single claim there is no source where it emerges from or who gave the information. They are not even stating that there were anonymous sources – unofficial or official, which additionally raises the doubts on whether what was published was actually true.

Did  Gruevski escape disguised as a woman?

Another popular item of misinformation was the widely republished claim that Gruevski crossed borders dressed as a woman. This claim inspired numerous memes, possibly in retaliation for his regime’s weaponization of misogyny and homophobia and use of anti-LGBTI propaganda to mobilize support.

Made in Hungary? Mr. Nikolas Steal and Run.

The source for this claim was a November 14 interview by well-known Macedonian law professor Vlado Kambovski on the reputable website SDK.mk. At a time when the details of the incident were still unknown, Kambovski speculated that anything was possible, even something as outrageous as the macho conservative politician donning women’s clothing in order to evade the law.

The [self declared] big hero and patriot Nikola Gruevski, who possibly disguised himself in woman’s clothes and escaped Macedonia, did a double offense in addition to the crime for which he was convicted and sentenced to two years in prison that he was supposed to serve… By escaping he provided rock-solid evidence of his guilt.

Several Hungarian media took this offhand remark literally and published articles with sensationalist headlines claiming that Gruevski had actually crossed the borders dressed as a woman, citing SDK as the source of the information.

To complicate matters further, some Macedonian media amplified the disinformation from these sources with headlines such as “Hungarian media: Gruevski crossed the border dressed as a woman.” These media leaned so heavily on these third-hand sources that they failed to realize that the rumor had, in fact, originated in their own country.

Gruevski’s regime, which ruled Macedonia from 2006 to 2017, invested heavily in propaganda and disinformation. Much of their infrastructure, including some of their media allies, is still in place and continues to manipulate information that often increases in sensationalism and inaccuracy as it travels back and forth across the region’s borders.

Journalists and fact-checking projects may be working hard to debunk them, but the flood of false claims and counterclaims within the general media sphere erodes trust in journalism as a pillar of democracy among the public, sinking them further into political apathy.

This article was republished from Global Voices with permission.