The title of the text shared in the post is false. The US has not sent troops to fight in Ukraine. Contrary to the content of the text, which talks about a deceased volunteer from America, the title suggests the official existence of the American military in Ukraine, which is manipulation. On February 12, the Pentagon ordered US troops stationed in Ukraine to leave due to reports of a Russian invasion. In addition, the caption falsely suggests that the photo shows “the destruction of US military in Ukraine”, and in fact, the picture is 14 years old and was taken in 2008

US military destroyed in Ukraine (PHOTO).

As part of the post, an article from MKD Press was shared, which consistently reads:

A US military Dane Partridge marked “Bird” was destroyed in Ukraine.

Born in Idaho, he arrived in Ukraine on April 27, took part in the battles of Severodonetsk. A week ago he received shrapnel in the head, fell into a coma and died soon after. The American went to his home state of Idaho on October 3 on a military plane in a body bag.

The title of the text is false. America has not sent troops to fight in Ukraine. In contrast to the vague content of the text, which seems to be talking about a deceased volunteer from America, the title suggests the official existence of American troops in Ukraine, which is manipulation.

US military forces have not been sent to Ukraine. The Pentagon relocated members of the National Guard back in February when they were training members of the Ukrainian army. On February 12, the Pentagon ordered US troops stationed in Ukraine to leave due to reports of a Russian invasion.

In August of this year, a few months after the departure of American troops from Ukraine, disinformation began to spread on social networks that they were still there. Garon Garn, a spokesman for the Department of Defense, told Politifact fact-checkers that it was disinformation and that there were no US military forces in Ukraine.

In this particular case, the text in the post we are reviewing refers to an individual, a volunteer from the United States.

According to a Daily Beast article, a State Department spokesman confirmed on October 12 that a US citizen had been killed while fighting in Ukraine.

Initial reports on social media identified the man as Dane Partridge, a military veteran from Idaho. When The Daily Beast reporters asked a State Department spokesman, he did not confirm the identity of the dead person but confirmed that an American citizen had recently been killed in Donbas. He added that State Department officials are in communication with the family of the deceased and that out of respect, no further details about his death will be shared.

The Daily Beast reports that Partridge wrote on his own Facebook account that he flew to Poland via Germany on April 26 seeking donations to buy uniforms. On April 27, he posted that he was getting on a bus to the border and that he would no longer provide information due to security reasons.

The next post on his Facebook account was from his sister on Tuesday (October 11), who wrote that Dane Partridge was on life support following life-threatening injuries while serving in Ukraine. 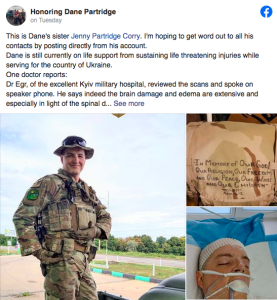 On the same day, two hours later, she informed that her brother had died:

We have just been informed that Dane has passed away. I know his soul has found peace. He always liked to joke and sometimes have serious conversations. Until the last days, he remained faithful to his faith and spiritual convictions. 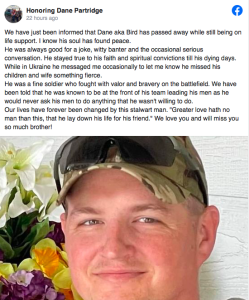 It is even more confusing and manipulative that the post we are reviewing and the title of the article being shared says: “US military destroyed in Ukraine (PHOTO)” and the photo itself shows a soldier in front of a plane. When the image is searched on Google, it is found in various contexts on several sites such as here, here, and the description is “US Air Force”. The photo is 14 years old, taken in 2008, which means the caption falsely suggests that it depicts “the destruction of the US military in Ukraine.” The New York Times has already written about the fact that the US refuses to send troops to Ukraine, so civilian volunteers, supported by online donations, go to fight in Ukraine on their own. Such is the case with the dead Dane Partridge.

Due to all the above facts, we assess that it is not true that the American army was destroyed in Ukraine. In addition, the photo accompanying the text does not show the alleged “destruction” at all, but originates from 2008.