The Photo Of The Burnt Bird Is From Iran, Not From Pehchevo

The photo shared in this post on Facebook is true and credible, but it was not taken in Pehchevo. It is more than a year old and is often quoted in the context of fires in different countries, but was originally photographed in Iran in mid-2020

We are reviewing a Facebook post that contains a touching photo of a burnt bird with a few eggs next to it.

A mother is a mother, no matter the kind. She could have flown away and been saved, but she stayed. Pehchevo. – reads the description of the photo. 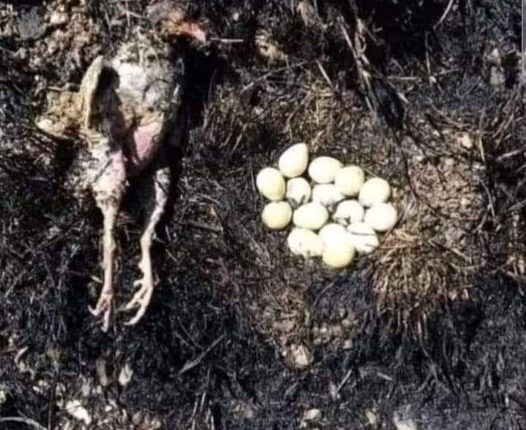 The concept that the citizens are more interested and more disturbed by the events that are part of the territory of the country in which they live, than those that occur geographically far from them, caused this photo to be shared on several platforms, including Twitter, and to have a significant number of reactions and likes. Thus, the post we are reviewing has 60 likes and 7 shares.

But, our fact-check showed that the photo is not from Pehchevo, where there was a fire these days. The photo was previously shared on Twitter by Hamid Mir, a Pakistani journalist who writes for the Guardian. He shared this photo on his Twitter profile on 29 May this year, more than two months before the fires broke out throughout Macedonia.

It was not difficult for this mother bird to fly away and save her life from the fire in Margalla hills forest of Islamabad but she never ran because there was life in her eggs. She wanted to protect lives inside eggs and gave her life, wrote the journalist.

Hence, we note that the same narrative of Hamid Mir is shared in the Macedonian post, only that it is adapted to Macedonian conditions, i.e. it is written that the event described in the touching photo is from Pehchevo.

Our further examination of the source of the photograph, however, leads us to the conclusion that Hamid Mir is not its author nor Pakistan is the place where the alleged fire took place.

According to Pakistani fact-checkers, the image is from Tehran, Iran. They posted the full photo on Twitter, as can be seen below, and not just the part of the bird and eggs that is shared in Macedonia.

The same photo was published by the news agency “Mer” in this video report from 25 July 2020 and stated that it is from Iran.

The article is in Persian and says that the bird burned to death while trying to protect its eggs in the Iranian city of Lavasan.

Other Iranian media outlets have published this photo from Iran in the same context.

Hence, in the post we are reviewing, intentionally or not the context is omitted. Although the photo is true and credible, it was not taken in Pehchevo. It is more than a year old and is often quoted in the context of fires in various countries, but was originally photographed in Iran in mid-2020.