Albanians Are Not “Mercenaries” Sent to Ukraine

Narratives portraying the Albanian as a criminal appears in the media when there is a political crisis in the country or in this case an international crisis such as that of Russia with Ukraine and the West. In the article under review, the Albanians living in Ukraine are labeled as mercenaries fighting against Russia, while the truth is that they left to live in this country, and then joined the army as professional soldiers 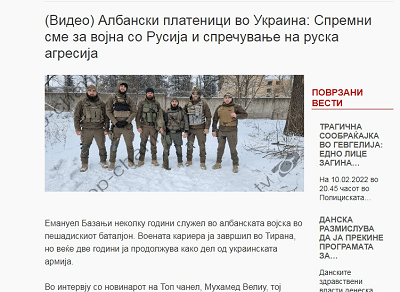 The author of the text reported the part where the soldier Emanuel Bazanyi says that he has been living in Ukraine for two years.

“Emanuel Bazanyi had served the infantry battalion of the Albanian army for several years. He terminated his military career in Tirana but has been prolonging it for two years as part of the Ukrainian army. In an interview with Top Channel for journalist Muhamed Veliu, he explains why he decided to join this country’s army, which at any moment anxiously waits to be attacked by Russia. “We are ready with the help of the allies,” Emanuel said, “to withstand every attack,” the reviewing article reads.

However, in the original interview in Albanian, Bazanyi says that he did not go to Ukraine to fight, but the author avoided this element. This is how the media is manipulating, as the article demonstrates the use of a manipulative technique known as the concept of “Selective Facts” in the CriThink Handbook. This concept tends to “present facts that speak in favor of, and at the same time ignore facts that contradict the claim.” Thus, the author deliberately leads readers to think that Bazanyi went to fight for a salary.

More interesting is the fact that below this text is this part of the article, so the author of the news self-denies his bombastic headline.

“My beginnings here are theoretically not directly related to war or whatnot. I came to this country to start a new life, plus to help the Ukrainian people,” Emanuel Bazanyi said in an interview with Top Channel.

To get an idea of why it is not strange for an Albanian to live alone in Ukraine, without being a mercenary at the same time, click on the text of Radio Free Europe which prepared a news story about the Albanians from Ukraine, who are said to be in thousands.

Pro-Russian bias and sympathy are evident in presenting him as a “victim” of paid military force, rather than as an army fighting for the rights and freedoms of its own country, such as Ukraine. Therefore, this article does not reflect the full truth since it avoids the key facts that completely change its direction. The key elements of the Russian narrative in the Western Balkans appear to have been used as illustrated in a StratCom (NATO Strategic Communications Centre) research:

This article has violated the basic principles of journalism such as: