Truthmeter refutes the disinformation spread by Janko Bachev on Facebook

Truthmeter.mk refutes the claims of Janko Bachev, the president of the political party “Edinstvena Makedonija”‘s (One Macedonia), who in the past several days and weeks has been persistently disinforming the general public, stating that he was exposed to „strong pressure and blockades“ by Truthmeter.mk, adding that he also said that he „doesn’t regret, let them block and filter in order to show smaller number of views“.

Nothing in this claim is true and it is a total disinformation. Truthmeter.mk cannot put a “blockade”, it cannot “block or filter” anyone, even if it had such intent!

Since July 2020, Truthmeter has been cooperating with Facebook within the third-party fact-checking program, and this cooperation doesn’t include blocking or erasing content. The program’s methodology also excludes processing of content published by politicians or political parties and, therefore, Bachev’s claims are groundless.

Bachev spreds disinformation about Truthmeter.mk not only through sharing, but also by sponsoring content, i.e. by paid sponsoring of his post, which can be seen in the screenshot below, so that he may spread further his disinformation.

Bachev continues the hate campaign against the concept of fact-checking started in November 2020, which includes defamation and media lynching of the employees of the Metamorphosis Foundation – Truthmeter’s publisher. Bachev joins the previously coordinated calls on social networks full of hate speech and misuse of photographs that were taken without permit from Foundation’s official portal. This persecution that was initiated by some media outlets and troll networks connected with political parties known for spreading disinformation, also includes threats with violence including online harassement of all the employees, including people who do not have any connection with the fact-checking, but are working on other projects or have administrative jobs. 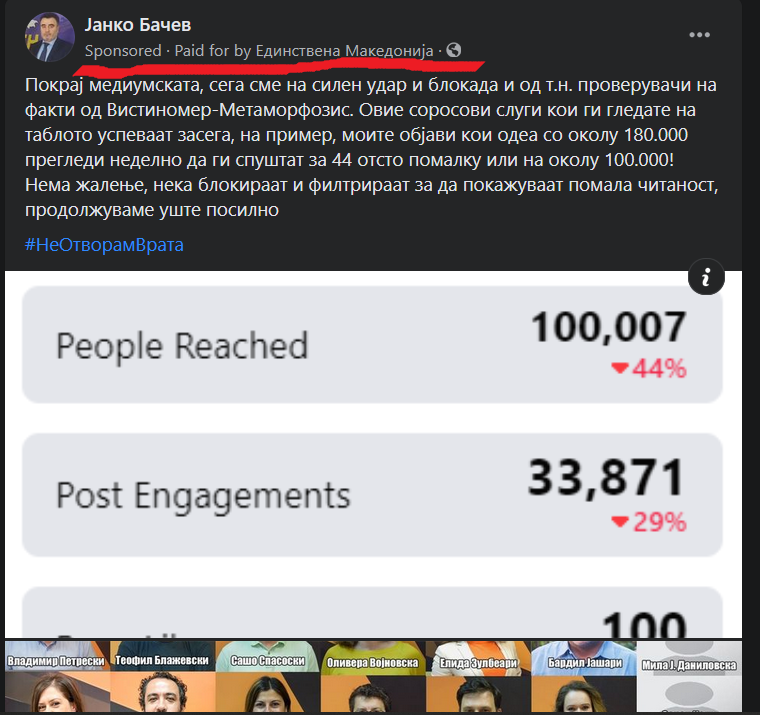 Regarding the partnership with Facebook, the activities of Truthmeter include reviewing content for which there is a reasonable doubt that they contain viral disinformation and they are marked by the reviewer who analyzed the content according to the published methodology.

This is the scope of Truthmeter’s activities in its cooperation with Facebook. The fact-checking is done in accordance with the methodology established by Facebook and it is the same one that is used by almost 80 organizations worldwide who are checking the truthfulness of the content published on this social network.

Bachev has no proof for this libel with which he is trying to present himself as a victim and to elicit undeserved sympathies, while simultaneously deceiving the general public. The same goes for his political party, including other politicians, media outlets and others who spread disinformation on the Internet and are trying to obstruct the work of the journalists in North Macedonia with attempts to discredit the fact-checking work and to introduce censorship by intimidating the journalists which do the fact-checking for the public interest.