Georgievski Did Not Make Any Statement Regarding Events in Ukraine

We are reviewing incorrect content published above a photo of the president of VMRO NP and former Prime Minister Ljubco Georgievski. He told “Truthmeter” that it was a matter of total disinformation, adding that he has not made any statement on any topic for two months. This is satirical news, but in the Facebook post it is not mentioned anywhere, and according to the comments under the post, it can be seen that almost everyone believed in what was written

An anonymous Facebook page published a post that is untrue, in which it is shown that the president of VMRO NP, Lubcho Georgievski, takes a position regarding the actions of the Macedonian security forces related to the events in Ukraine.

This is incorrect information written above the photo of the president of VMRO NP.

Georgievski confirmed for “Truthmeter” that the announcement is disinformation.

This is a post that is totally fabricated. For two months now, I have not given any statement on any topic, Georgievski told us.

When the same content of the disinformation is typed on the Google search engine, you are shown satirical news published by the internet portal tvvesti.com, whose title is the same as the post we are reviewing. At the end of the announcement on tvvesti.com the following disclaimer is placed:

The article is satirical and all the similarities are coincidental

But, unlike the satirical news published on tvvesti.com, the Facebook post we are reviewing does not contain the disclaimer, and according to the comments under this post, it can be seen that almost everyone believed that Georgievski said it. 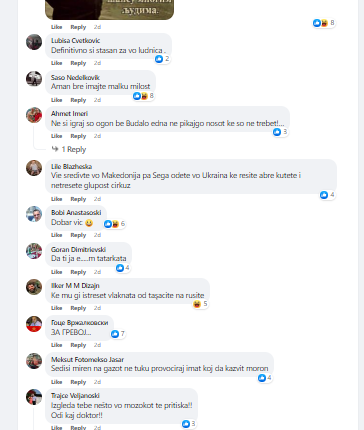 Given all of the above, we assess that the Facebook post that is the subject of our review incorrectly claims that Georgievski stated: “Macedonian troops in Ukraine must put strong pressure on Russia.” This disinformation also violates Georgievski’s credibility, which is evidenced by a large number of comments under the announcement – over 200.