The General Secretariat of the Government has paid at least 2.4 million euros, from 2017 until the end of 2021 for copyright agreements. The money went to individuals to attend government meetings and create minutes, attend meetings, create website content, or provide regular consultations. The Anti-Corruption Commission considers that the law has been violated, i.e. the Law on Copyright should not have applied to the engagements of many of these persons, and their activities should not have entered the domain of “copyright works”.

The state institutions/bodies of the state administration and the LSGU, as well as the public enterprises in the period from 2018 so far, have concluded copyright agreements of almost five million euros, with different persons, and with one intellectual property agency, according to the data of the State Commission for Prevention of corruption.

Truthmeter has already written that the practice of concluding copyright contracts for temporary employment, without job advertisements, is extremely risky and is an opportunity to give money to party members, instead of qualified staff. For this, there are numerous criticisms in almost all EC reports on the progress of N. Macedonia.

The Anti-Corruption Commission inspected the activities and documentation related to the engagements based on an author agreement for 01.01.2017 to 31.10.2021 because that period falls within its competence.

Based on the actions taken within the competent action, the SCPC gained information that in the indicated period by the General Secretariat of the Government a large number of individuals were engaged based on copyright agreements, according to the commission.

According to the Anti-Corruption Commission, the Law on Copyright should not apply to the engagements of many of these persons, i.e. their activities should not have entered the domain of “copyright works”.

The SCPC believes that the engagements do not mean creating a copyright work according to the definition of the Law on Copyright and Related Rights or performing activities aimed at creating a copyright work, but refers to undertaking specific and repetitive actions on a daily basis, such as: attending sessions of Government and creation of minutes, attendance at meetings, analysis of data and information, handling cases from different areas, creation of content for website and social networks, analysis of media appearances, media analysis, event photography, organization at events, giving regular consultations, organizing trainings, performing work for the needs of the cabinets of appointed persons in the Government, contacting external parties, IT maintenance and analysis, etc.

In this way and through this type of engagement, which according to the commission does not belong to the domain of copyright works and for which a job advertisement should have been posted, the General Secretariat of the Government paid at least 153,244,219 denars or 2,491,776 euros, from 2017 until the end of 2021.

The infographic below shows the payment of amounts for copyright agreements by year. 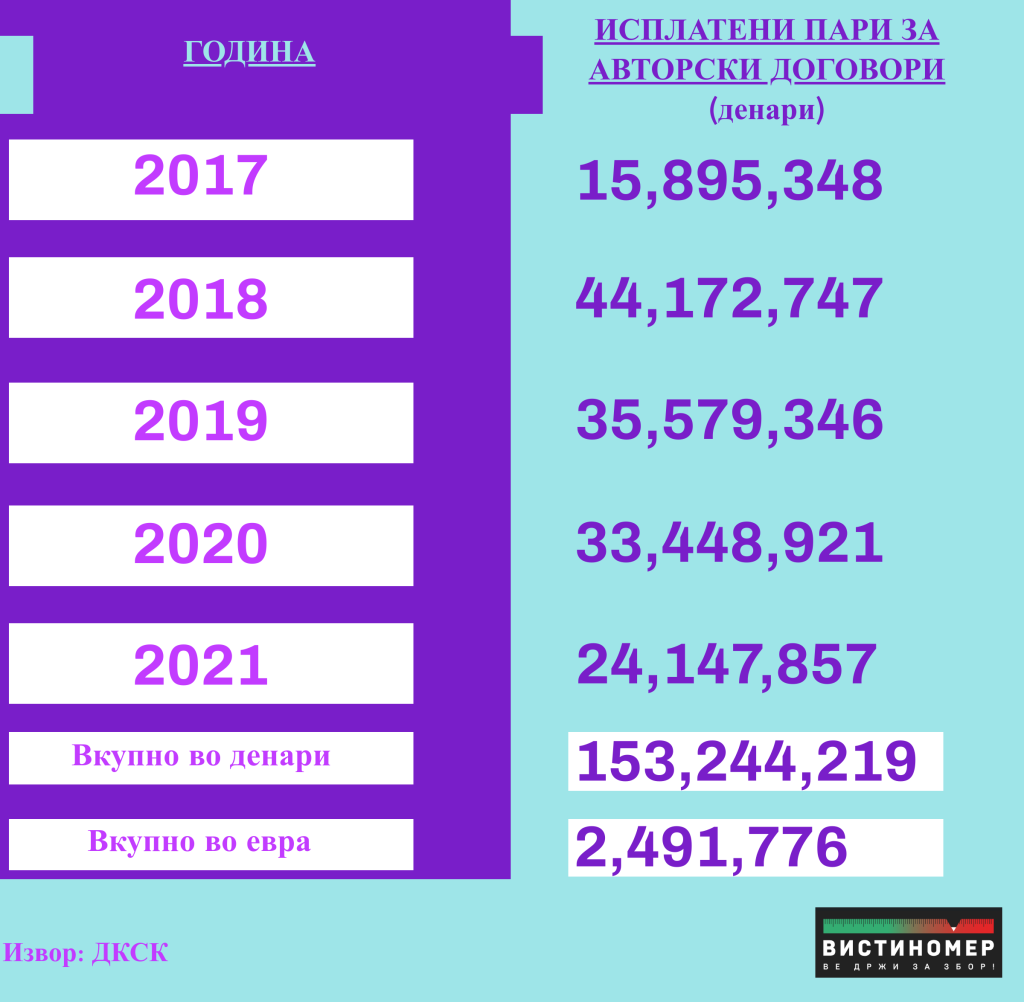 The Anti-Corruption Commission concludes that this way of hiring individuals has bypassed the application of the relevant provisions of the Law on Public Employees and the Law on Administrative Servants which cover the general principles (principle of equal conditions, equal access to work, adequate and fair representation, the principle of expertise and competence), as well as the manner of planning the employees and the manner of conducting the employment procedures.

The state is regularly scrutinized due to employment through copyright agreements and temporary employment which are literally practices for hiring people in institutions, skipping the regular employment procedures. Two years ago, the State Commission for Prevention of Corruption reacted that “such employments are manipulated by the fact that employees are hired to perform tasks provided by the systematization for a longer period, and not as provided by law, for increased workload replacement of an employee who is absent for a long time, or for a certain job – projects “.

A similar thing is confirmed in the Annual Report on the implementation of the National Strategy for Prevention of Corruption and Conflict of Interest 2021 – 2025 for the period 01.01.2021 – 31.12.2021. The report states that the Ministry of Information Society and Administration has committed itself to abolish the possibility of employment through temporary employment agencies and the possibility of transforming temporary employment into full-time employment without a regular employment procedure. This did not happen by the deadline, i.e. in the second half of 2021.

Temporary employment, in recent years, has been severely criticized in European Commission reports as an opportunity to hire party supporters in the public administration. These employments were referred to as “purposeful, political and arbitrary employments”.

Procedures for fixed-term contracts and work contracts with lower criteria continue to be used frequently, bypassing the criteria set out in the Law on Administrative Servants, according to the latest progress report on the country from the European Commission.