Russia’s Ministry of Defence said Ukrainian troops had laid down their arms, citing intelligence services. But such information is denied by Ukrainian fact-checkers. The news of a mass laying of arms by Ukrainian troops is false. Such a thing never occurred and the Ukrainian army continues to oppose Russian attacks

During the Russian attack on Ukraine that began in the early morning hours of February 24, 2022, the media reported that Ukrainian troops were laying down their arms and withdrawing from combat positions. The news, for which there was no official confirmation, was published by several Macedonian portals, citing Moscow, which in turn received the information from the intelligence services. The information that Ukrainian soldiers laid down their weapons was denied by the Ukrainian fact-checkers.

According to military intelligence, Ukrainian troops are leaving the battlefield and laying down their arms. A firm guarantee has been given that those who will lay down their arms will not be attacked by the Russian military forces, Mkdpress reported.

Ukrainian troops are leaving their positions in the face of a Russian offensive, Moscow has said, insisting that its armed forces do not attack cities and pose “no threat” to civilians. So far, there is no evidence for this claim, Mkd.mk reported.

“Kumanovski Muabeti”, on the other hand, referred to the Russian Ministry of Defense, which stated that:

Intelligence shows that units and the army of the Armed Forces of Ukraine are leaving the positions laying down their weapons.

The news was published by the portal “Taratur”, which also referred to Moscow.

According to Netpress, citing a statement by the spokesman of the forces of the self-proclaimed People’s Republic in Donetsk, Eduard Basurin, the Ukrainian armies in the east of the country suffered losses after the arrival of Russian forces and demanded the opening of humanitarian corridors to withdraw from the area.

The opponent suffers losses… They have already contacted us to make a humanitarian corridor for them. They are ready to lay down their arms, cross over to our side and survive, Basurin told Russia 24.

It is true that the Russian Ministry of Defense announced that Ukrainian soldiers had laid down their arms, citing intelligence services.

Intelligence shows that some units and soldiers of the Armed Forces of Ukraine are leaving their positions, laying down their arms. The positions of the units of the Armed Forces of Ukraine that laid down their weapons are not subject to attack, said the chief spokesman of the Ministry of Defense of the Russian Federation, Major General Igor Konashenkov.

The Ukrainian army, using the right of self-defense in accordance with Article 51 of the UN Charter, repels attempts by Kremlin attackers to cross the border, writes Stop Fake.

According to the operational information of the General Staff of the Armed Forces of Ukraine, the joint forces repel the armed forces of the Russian Federation.

Military units in their positions. The enemy suffers losses, say from the Headquarters, reports Stop Fake. 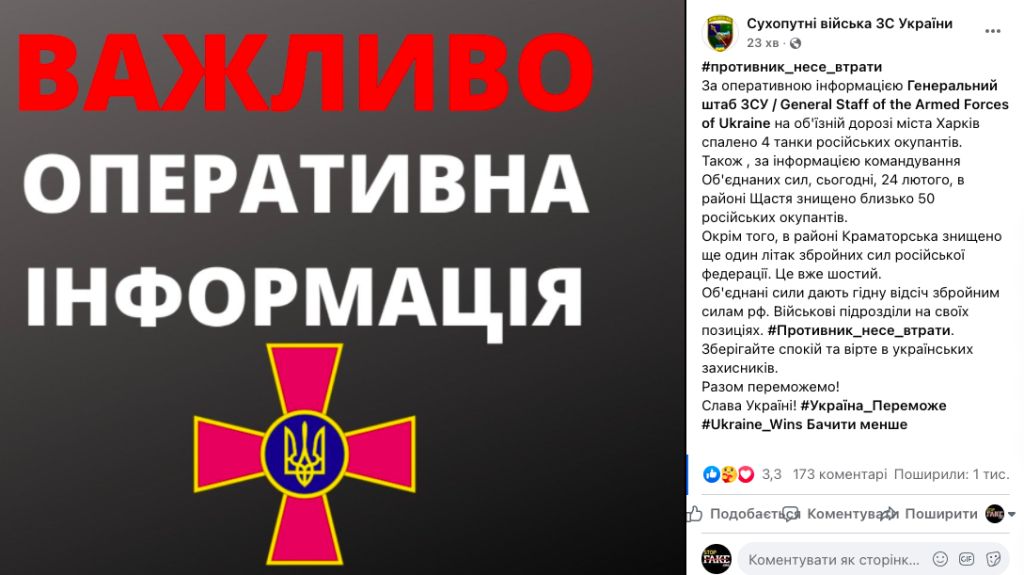 Ukraine’s armed forces have been on full alert since 5 a.m. – the moment Russian President Putin declared war – and have repulsed Russian attacks. The Ukrainian army has occupied and is holding defensive positions, Stop Fake reports.

Given all of the above, it can be concluded that the news of the mass laying down of arms by the Ukrainian soldiers is false. Such a thing did not happen, and the Ukrainian army continues to oppose Russian attacks.

The journalist’s task is to publish accurate and verified information. If the information can not be confirmed, or it is a guess, i.e. speculation, it should be said and pointed out. The accuracy of the information should be checked, according to the Code of Journalists.