In the two Macedonian parties with a pro-Russian ideology, “Rodina Makedonija” and “Obedineta Makedonija”, there has been turbulence in the recent period, that is, over 240 founders from “Rodina Macedonia” submitted to the Constitutional Court a request to leave the party, and for it to be deleted from the register of parties. One of the petitioners of this request is Milan Jovceski, the holder of the list for Prilep from “Obedineta Makedonija”, who stood side by side with the leader of United Macedonia, Janko Bačev

There is a shift of membership from one political party to another in the country, which have pro-Russian views in its ideology. Namely, the founders of the “Rodina Makedonija” party requested the Constitutional Court for protection and the opportunity to exercise their right to leave the party, because, as they explain, “they no longer see themselves in it, nor do they share its ideology.” 247 founders of the party, through an initiative submitted by the lawyer Trajče Arsov from Veles, submitted a request for the protection of the right to freedom of thought and public expression of thought, political association and action and prohibition of discrimination based on political affiliation.

Arsov tells Truthmeter that if their arguments are accepted, the party “Rodina Macedonia” may be left without the required minimum of 1,000 founders, and thus be deleted from the Unified Register of Political Parties.

These 247 founders were previously rejected by the Skopje Civil Court, and then by the Court of Appeal, because the court ex officio re-registers the parties every four years, which, in turn, are obliged to submit certified notarized statements to at least 1,000 founders.

Lawyer Trajče Arsov says that these citizens do not want to wait until 2024 for their deletion as founders to be confirmed.

According to the request submitted to the Constitutional Court, Milan Jovčeski from Prilep is among 247 founders who want to leave the party. Although we asked him for a statement, through his lawyer, he did not want to speak publicly.

If you search for Jovceski’s name on the Internet, you can immediately see that he is already involved in the other Macedonian party that advocates pro-Russian views, “Edinstvena Makedonija”, whose founder and leader is Janko Bačev.

Namely, the caravan of “Edinstvena Makedonija” – “Now you have a choice” last October promoted the councillor list and the holder of the list for Prilep from “Edinstvena Makedonija”, Milan Jovčeski, who is still one of the founders of “Rodina”. Then the president of the party Bačev also spoke, who called on the people of Prilep to vote for the good of Prilep, standing side by side with Jovčeski.

Hence, the assumptions are that these 247 people are already involved in Bačev’s party, and they want to officially leave “Rodina”, and the number of members to fall below 1,000, so that the party, which is in a way a competitor, would be deleted from the Central Register.

However, Zoran Jovančev, the chairperson of “Rodina”, says that it is impossible to happen.

I do not want to discuss the reasons why some members want to leave the party. It is their personal matter, they have changed their views. There are two court decisions on the case, both from the Civil Court and from the Court of Appeals, that the court ex officio re-registers the parties every four years, which in turn are obliged to submit certified notarized statements to at least 1,000 founders. We have to fulfill this condition only in 2024, and we now have almost 1,500 members, which means that even without these 247 members, we satisfy the condition. Annulment of a political party does not just happen, there are procedures and the Civil Court is responsible for that, which decided in our favor, Jovanchev told Vistanomer.

The party “Rodina Makedonija” (“rodina” means “motherland” in Russian) was founded in 2020 and is managed by the Presidency as a collective governing body.

Presenting its program, the party “Rodina Makedonija” advocates, among other things, for the country to withdraw from the NATO Alliance and join alliances such as BRICS, the Silk Road and the Eurasian Economic Union (EEU). For joining the EEU, which was established by the agreement signed between the leaders of Russia, Belarus and Kazakhstan, a petition is being signed on the website of “Rodina Makedonija”. There is no data on how many people have signed this petition so far.

In the program goals, “Rodina Makedonija” calls for, as it says, “cooperation for a more peaceful and safer world with our like-minded people, the patriots from America, the European nations, through the fraternal Slavic peoples and Russia, the new regional and world powers from Turkey, through India and China.”

The party advocates the expulsion of all foreign formal and informal military formations from the territory of the Republic of Macedonia. No for NATO, not for the EU. Cooperation with international organizations only on the principles of equality and respect. Withdrawal from NATO military missions and a policy of pacifism. Canceling the registration and work permit of all NGOs financed with foreign funds, it is written in the program objectives of the party.

In the local elections in 2021, the party appeared independently with its candidates for mayors in the City of Skopje and in the municipalities of Centar and Berovo, as well as with candidate lists for council members in the City of Skopje and the municipalities of Centar, Aerodrom, Kisela Voda, Gazi Baba, Karpoš, Butel, Konče and Makedonski Brod. The party did not manage to win either the mayoral seat or seats in the councils.

The documents on the party’s operations during the 2021 local elections show that the party ran a modest campaign with nearly 230,000 denars spent. According to the financial report submitted to the State Audit Office, “Rodina Makedonija” remained in the red after the elections and failed to cover 83,584 denars spent in the campaign.

The list of donors is interesting. The biggest donors are Gordana Godzo, known for her anti-vaxxer views, who donated 16,000 denars, then Olivera Stojanovska with two donations of 10,000 denars each and Zoran Jovančev with 8,700, while the remaining 13 individuals donated between 150 and 3,000 denars. 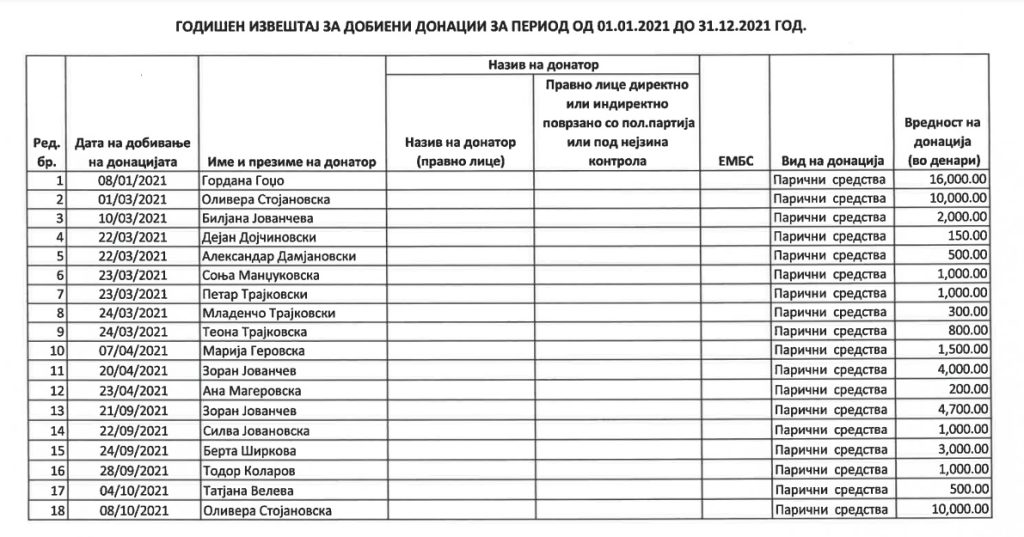 On the YouTube channel of “Rodina”, live shows are regularly held, where the journalist Mirka Velinovska, the chairman of the party Jovančev, the professor Stefan Vlahov Micov, Andrej Rodionov from “Rusov”, the international association for Russian-Slavic cooperation and association and many others are guests.

The Constitutional Court is on the move

The case with number 63/22, which you are interested in, has been handed over to the counsel of the Court and to the judge, in accordance with Article 17 of the Rules of Procedure of the Constitutional Court. It was established on June 27, 2022, and a preliminary procedure is currently underway, which includes opinions from the body that adopted the contested article, analysis of the constitutional-jurisprudence, followed by the preparation of an abstract. From Article 23 of the Rules of Procedure comes the content of the abstract, which should cover the request that was made, describe what preparations have been made, what disputed legal and factual issues have arisen during the work on the case, an overview of the constitutional-judicial practice, opinion and a proposal on how to resolve the request. The report is handed over to the president of the Constitutional Court, who has the obligation to propose it for the agenda of the session, according to the Constitutional Court.

The Constitutional Court has so far had several cases with requests to review the actions of political parties. The last one is with the supremacy in “Levica”, when Zdravko Saveski, Ceylan Veliu, and Petar Čurikj submitted a request for the protection of freedoms and rights from Article 110 paragraph 3 of the Constitution, which refers to political association and action. Earlier, before the Civil Court, they requested to change the current legal representative of the “Levica” political party with another person proposed by them, but their request was not approved.

The Constitutional Court rejected the request on the grounds that “the question of relations in the political party between the membership, their rights and obligations, disagreements on certain issues in the political party, more specifically allegations of violation of the right to political association and action due to intra-party conflicts of interests and conflicts between members in the existing registered political party, etc., are internal party issues that cannot be brought under Article 20 of the Constitution” (Constitutional Court, case U. no. 125/2019-0-0).