In one of the photos, it is not a question of a child from Donbas at all, but from Iraq, named Muhammad Adman, who suffered from shrapnel. Another photo was misused to spread manipulations back in 2015 and was debunked by the fact-checking site Stop Fake. CNN writes that the Italian photographer Andy Rochelle took the third photo in 2014 during the Ukrainian-Russian conflict in Donbas and shows orphaned children in Slavyansk, Ukraine, who sought shelter in the basement of the shelter

We are analyzing a Facebook post that, commenting on the war in Ukraine, manipulates the public by sharing photos of children it claims are “Russian children from Donbas”, photographed in the last eight years. The post alludes to the alleged aggression that Ukraine is carrying out against the Russian population in Donbas. Our review found the claims in the post to be false and manipulative.

Things have a completely different epilogue when instead of three generals and Moscow, only one general decides who has free hands to defend Russian territory.

For the first picture with Zelensky’s statement, let him not be afraid of their destruction, because no matter what, the Ukrainians and NATO will reach the Kremlin.

The first video is from the BBC, and the second video is from how the day started for the Ukrainian sorospies and northerners. And it still lasts.

And the last 3 pictures, so that you don’t get confused, are Russian children in Donbas, for the past 8 years, it is stated in the post that we are reviewing.

If you Google the photos that are claimed to show “Russian children from Donbas”, you will find a completely different story about them.

In the first photo it is not a child from Donbas at all, but from Iraq, named Muhammad Adman, who suffered from shrapnel. 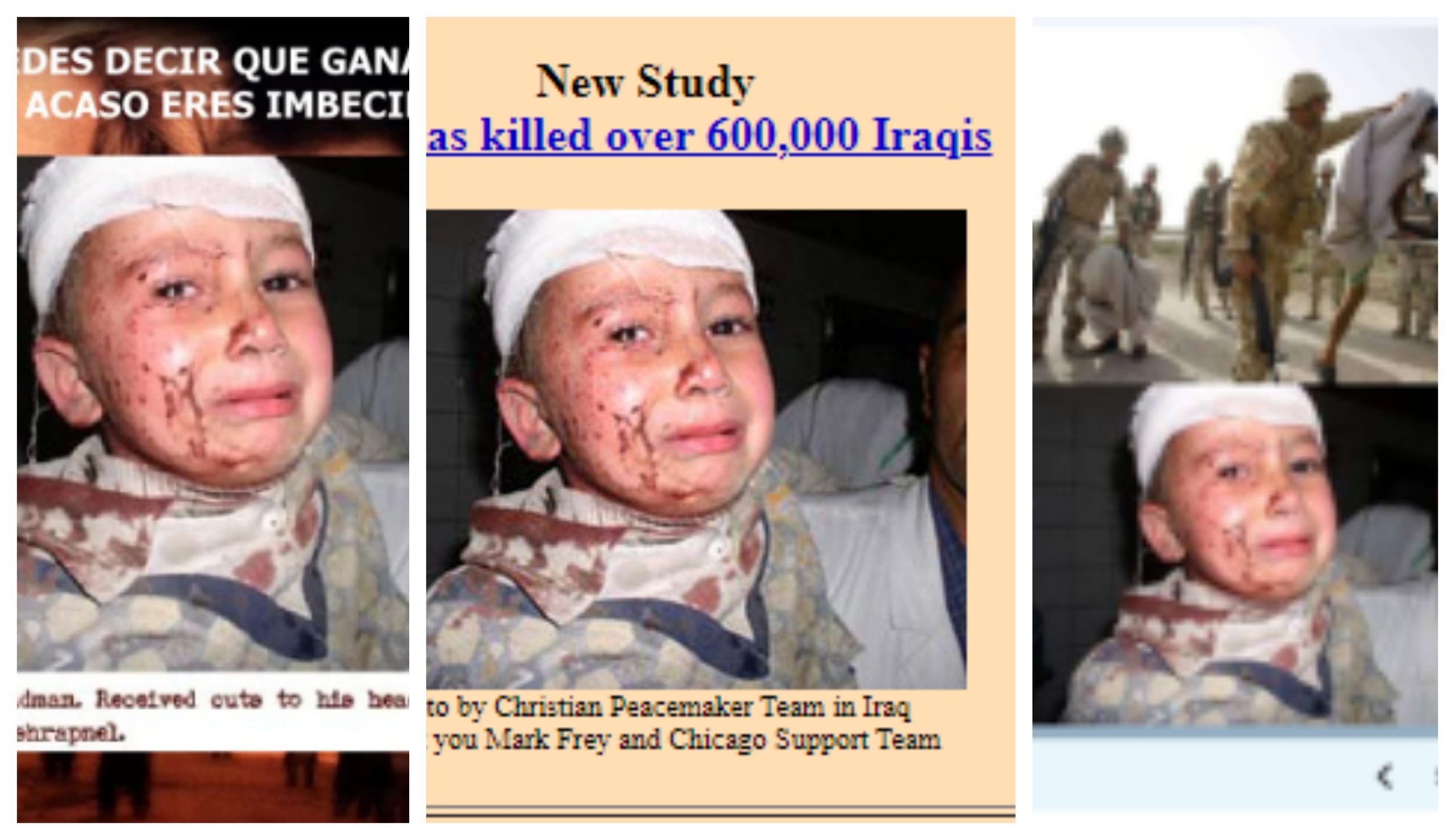 The photo is much older and on the search engine Tin Eye you can find entries with it from 2008, 2009, and 2013. The photo in all the articles we were able to find on Google is associated with Iraq, not Donbas, as the post, we are reviewing suggests.

The photo with the second child has been misused to spread manipulations as early as 2015 and has been debunked by the fact-checking site Stop Fake.

In mid-September of the same year, social networks began to actively spread a staged photo of a boy walking in the middle of shelled buildings. The post claimed that the boy was from Donetsk and was looking for his mother among the remains of the building, destroyed by the bombing of the Ukrainian army.

The photo was even published on the website of the Russian television channel RenTV on September 17, with the same explanation – that it is a boy who is looking for his mother among the ruins.

But this is not the complete truth.

The photo is from the video clip “Angel: a song for the children of Donbas” (00:51), and the little boy is one of the actors participating in a fully planned performance, writes Stop Fake.

The footage actually shows the ruins of the town of Nikishin in the Donetsk region, where a boy and a girl are shown calling for help.

The video was posted on YouTube on September 16. Its director, Dan Levy, wrote on Facebook on August 17 that the children in the video are brother and sister, that they have parents, and that they currently live in a shelter.

Stop Fake also publishes a video from September 1 of this year, which shows that the boy and his mother are good, that they are together, and that they live in a shelter.

The third view of the post we are reviewing is divided into two parts, i.e. two photos. 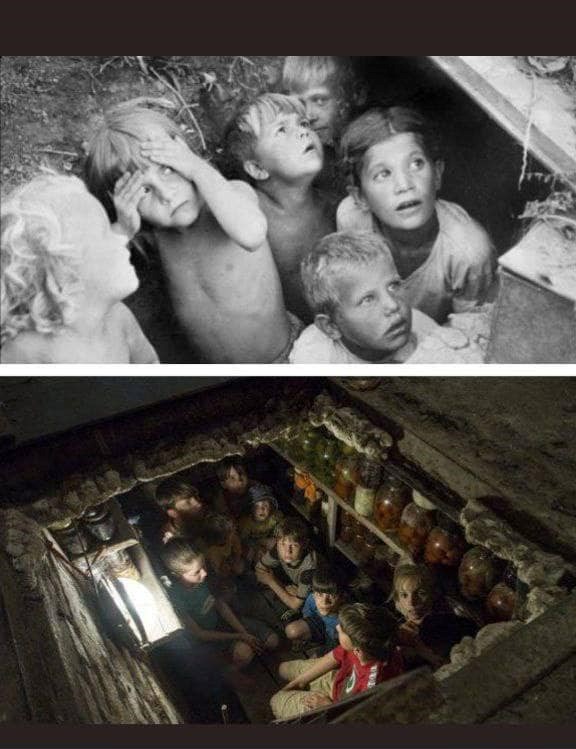 The one above, as reported by the Guardian, was taken in July 1941 during the Second World War and shows Russian children hiding in a shelter during air raids on the Eastern Front.

The bottom photo, CNN reports, was taken by Italian photographer Andy Rochelle in 2014 during the Ukrainian-Russian conflict in Donbas and shows orphaned children in Slavyansk, Ukraine, seeking refuge in the basement of a shelter. It was one of the last photographs taken by the Italian photographer Rochelle, who was killed during a mortar attack. Slavyansk was occupied by pro-Russian separatists for only a few months in 2014 and has been under the control of Ukrainian authorities ever since. This means that in the period from 2014 until the beginning of the current war in Ukraine on February 24, 2022, if the city was subject to artillery attacks, they were carried out by pro-Russian separatists. In addition, after February 24, 2022, the city was undoubtedly a regular artillery target of Russian forces in order to break the resistance of the Ukrainian defenders and capture Slavyansk, along with the nearby regional center of Kramatorsk. But both cities are still under Ukrainian control, and the danger and artillery attacks on them are now far less since the nearby strategic locations, the cities of Izium and Liman, from which the artillery attacks on Slavyansk came, after the Ukrainian counter-offensive in September, are no longer under the control of Russian forces.

The War in Donbas was an armed conflict in the Donbas region of Ukraine, part of the wider Russo-Ukrainian War. In March 2014, immediately after the Euromaidan protest movement and the subsequent Revolution of Dignity, protests began by pro-Russian, anti-government separatist groups in Ukraine’s Donetsk and Luhansk regions, called Donbas. These demonstrations began around the same time as Russia’s annexation of Crimea and were part of wider pro-Russian protests across Southern and Eastern Ukraine. Proclaiming Donetsk and Luhansk People’s Republics (DPR and LPR, respectively), Russian-backed armed separatist groups seized government buildings across Donbas, leading to armed conflict with Ukrainian forces.

Considering all this, it can be said that the post contains falsehoods and manipulations to mislead the public. Most of the photos do not show children in a military context in Donbas or “Russian children in Donbas”. The residents, and thus the children of Donbas, are citizens of Ukraine, who speak Russian, like many other residents throughout Ukraine. Just one photo shows children sheltering in a basement in Donetsk in 2014. Because of all this, we assess the post as untrue.