Russia’s state-run news agency “Sputnik” in its Serbian edition on 10 May 2020 published an article entitled: “Completion of affairs with Kosovo is a springboard for NATO to Russia” which peripherally mentions North Macedonia, presenting several pieces of misinformation. Specifically, untruths were placed about the alleged “division in North Macedonia regarding NATO membership”, then that “Zaev’s government fell infamously”, as well as misinformation about the ratings of the two largest parties in the Macedonian bloc – SDSM and VMRO-DPMNE.

The claim that the Macedonian public is divided regarding NATO accession has nothing to do with reality. At the end of March, the Republic of North Macedonia officially became the 30th member of NATO. The membership of North Macedonia in the Alliance is supported by a large majority of ethnic communities because NATO is recognized as a factor in preserving the country’s stability and internal cohesion. The road to NATO lasted almost three decades, and on this long journey, there was much turmoil. During this time we were demoralized – like in 2008 when we did not succeed at the Bucharest summit, but the fact is that citizens have always strongly supported the idea of becoming part of the most powerful military-political alliance. This is clearly shown by the polls conducted in the past period, which show that the support for such a reached up to 92 percent (April 2008 before the NATO summit in Bucharest) and never fell below 60 percent.

We are going to mention only a few conducted pieces of research:

The field survey conducted by the International Republican Institute, IRI from 28 June to 15 July 2018 (during the Prespa Agreement) shows that out of 1,100 respondents, 77 percent support the NATO membership.

According to an IRI survey conducted from 6-16 June 2015, on a representative sample of 1,105 respondents, a high 83% support the country’s NATO membership.

The survey conducted by the Institute for Political Research Skopje for the show “Detector”, on a representative sample of 1,116 respondents in the period from 16 – 19 November 2019, showed that if a referendum was to be held, 67.3% of respondents would vote for NATO membership.

Therefore, it is unclear how “Sputnik” concludes that “Macedonia is divided regarding NATO membership”. The text does not offer any facts and does not refer to specific surveys to support the aforementioned claim, which is undoubtedly an allegation given for the needs of this non-objective article, which goes in line with Sputnik’s well-known thesis that NATO’s expansion is directly targeted to the long-term extinction of Russia’s influence in the Balkans.

The claim in the article that “Zaev’s government fell infamously (January 2020)” is completely incorrect. The government led by Zaev did not fall, but Zaev resigned on 3 January 2020, to pave the way for the formation of a technical government. This happened 100 days before the early parliamentary elections – then agreed on 11 April (but cancelled due to the coronavirus epidemic), to be formed a technical government under the so-called “Przino model”, which is now a legal obligation. This model was first applied in the early parliamentary elections in 2016, after the political crisis that followed in 2015, when Zaev – then leader of the opposition, began to publish wiretapped conversations.

NO PARTY HAS A DECISIVE ADVANTAGE ACCORDING TO PUBLIC OPINION POLLS

Another claim that is untrue that “in the next elections, VMRO has a better chance (42.6% rating in the survey before the pandemic)”. It is not clear from the text what research “Sputnik” is referring to, but polls conducted in recent months do not show a better chance for the largest opposition party. According to opinion polls, there is a somewhat even percentage between SDSM and VMRO-DPMNE with a slight lead by SDSM.

A public opinion poll conducted by the National Democratic Institute (NDI) between 26 February and 5 March 2020, before the decision to postpone the elections scheduled for 11 April, shows that 22.9 percent of the respondents would vote for SDSM, and the support for VMRO-DPMNE was 19.6 percent.

The International Republican Institute (IRI) survey, conducted by BRIMA face-to-face with 1,222 respondents between 30 January and 10 February this year (also before the coronavirus epidemic and before the elections were postponed) showed that SDSM has one percentage point advantage over VMRO-DPMNE. When asked who they would vote for if the elections were held this week, 17% said for SDSM, 16% for VMRO-DPMNE. There is a decline in the popularity of both parties compared to IRI’s research from 2017 and 2018 (SDSM by 3 percent, VMRO-DPMNE by 1 percent).

Thus, the unsubstantiated claim that in the “in the next elections, VMRO has a better chance” is at least problematic and much more likely simply untrue. 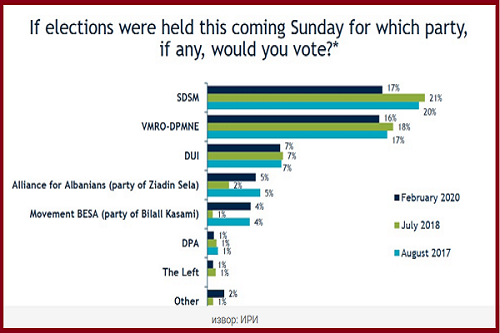 This article was created within the framework of the Project to increase the accountability of the politicians and political parties Truthmeter implemented by Metamorphosis. The article is made possible by the generous support of the US non-profit foundation National Endowment for Democracy (NED). The content is the responsibility of its author and does not necessarily reflect the views of Metamorphosis, the National Endowment for Democracy or their partners.
вмро-дпмнеЗоран ЗаевНАТОрегионСпутник
0
Share FacebookTwitter
You might also like More from author

Counterspin: The Humanitarian Aspect of the Concern Expressed by “Levica” about the…