The Census Revealed How Many People with Disabilities Live in the Municipalities, it is the Turn of the Mayors to provide them with Conditions

By Мери Јордановска On Jun 10, 2022 0
Фото: Image by PublicDomainPictures from Pixabay

There are 1,674 children with disabilities aged 0 to 14 in the country, 43.5 percent are people aged 15 to 64, and 54.8 percent are over the age of 65. At the census, 38,499 people reported having problems with movement, 12,371 said they had problems with vision, 5,947 with hearing, 3,896 with communication, and as many as 33,699 people reported having other difficulties. The number of people with disabilities in the country is not low at all, and although the country 2019 adopted new services for them, it still does not reduce discrimination against this vulnerable category of citizens. What the EC noted in its 2021 report is that this category of citizens continues to face discrimination, lack of infrastructure, information and services

The number of people with disabilities in the country is not low at all, and although the country 2019 adopted new services for us, it still does not reduce discrimination against this vulnerable category of citizens. What the EC noted in its 2021 report is that this category of citizens continues to face discrimination, and lack of infrastructure, information and services.

The publication on Judicial Reform published by Metamorphosis, regarding the section on basic human rights, states that many experts on the problems faced by persons with disabilities who were communicated for the purposes of the report stated that, although the legal framework is good, the problem is the practice, i.e. the implementation of the laws.

Regarding the structural discrimination, the Helsinki Committee for Human Rights made its assessment on 10.12.2021, the International Day for Respect of Human Rights. At the very beginning, HC stated that in RNM “structural discrimination is still most visible in the treatment of Roma, persons with disabilities, sexual and gender minorities, women, persons in closed institutions.” However, as a field in which the state makes an effort to resolve certain situations, it should be noted that the Government submitted to the Assembly, and the Assembly adopted amendments to the Law on Child Protection, which extends the allowance for children with disabilities in terms of duration throughout the year and for those children who are out of their place of residence during school, the report says.

In addition, the Ministry of Labor and Social Policy on its website in December announced new amendments to this Law, which will allow the application for a special allowance for these children to be submitted electronically and the service can be obtained electronically. At the same time, with the beginning of the school year in September, the state provided funds with which about 500 educational assistants are available to children with disabilities in the educational system, textbooks in electronic and audio format were made, as well as textbooks printed in Braille. The government says it has also increased the rights to use a personal assistant who can now be obtained between the ages of 6 and 64.

Eight months ago, Margarita Milosheska, coordinator at the Resource Center for Parents of Children with Disabilities, said in the “Morning Briefing” that it is necessary to establish a National Register of Persons with Disabilities and that it should start with the municipalities. Milosheska said that if mayors know exactly what kind of people with disabilities predominantly live in their municipality, such as people with cerebral palsy, autism, etc., they would know better what to do depending on the numbers.

Now, with the publication of the census data, the exact number of people with specific disabilities is known and depending on that, plans could be made regarding whether and where more centers are needed. It is up to the mayors to decide how will they use this data to improve services for people with disabilities in their municipalities.

The latest report of the European Commission on the progress of the country assessed that there is little progress in improving the rights of people with disabilities, however, they continue to be discriminated against.

People with disabilities continue to face significant, direct and indirect discrimination, due to barriers related to infrastructure, lack of information and services, discriminatory attitudes and social exclusion. In 2020, the ombudsman filed 37 complaints of discrimination against children and adults with disabilities, the report said.

For most people with disabilities, measures to prevent and protect against the virus have made it difficult for them to function on a daily basis. The difficulties refer to the limited socialization and the limited movement, as well as to the difficulties related to obliging the protection measures (maintaining a physical distance, wearing a mask, avoiding grouping, etc.). People with disabilities and their caregivers faced difficulties in exercising their rights during the pandemic, of which only a small proportion sought help mostly in social work centers, and a small proportion sought help from civil society organizations. Only a handful of people got the requested assistance, i.e. they exercised the requested rights.

This is stated in the publication “The Impact of the Covid-19 Crisis on People with Disabilities” published by the Initiative for Democracy in the Western Balkans last year.

Children with disabilities faced serious problems in attending online classes, which was largely inappropriate and unadapted to them and the different types of disability. The teaching took place in the absence of appropriate educational aids, i.e. lack of necessary technical equipment for monitoring the teaching. People with disabilities and their caregivers have faced difficulties in exercising their rights during the pandemic, as well as a lack of adequate support for attending classes (educational assistant, special educator, etc.), the publication said.

For a large part of the respondents (79.8%), the measures for prevention and protection from the virus imposed difficulties in their daily functioning. Regarding the provision of health services and health care, they stated that they had the biggest problems getting service from a specialist and rehabilitation. 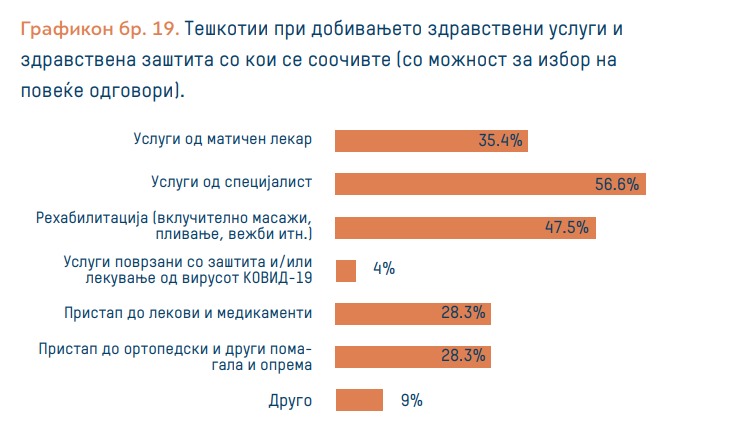 A smaller number of respondents, i.e. 29.4 percent, had trouble at work during the pandemic, of which almost half (48.4%) were related to absence from work due to protection from the virus and due to caring for another person in the home. According to the data from the analysis for “Covid-19 and gender”, a large number of people with disabilities were left without economic benefits due to measures for not going to work and thus were directly exposed to poverty without any social security.

“Given that even before the pandemic, people with disabilities often had difficulty entering the labor market, but now that risk increases significantly, including the risk of losing their job as well as difficulty returning to work,” the publication said.

Nearly a third of respondents said they faced transportation and mobility difficulties during the corona crisis. 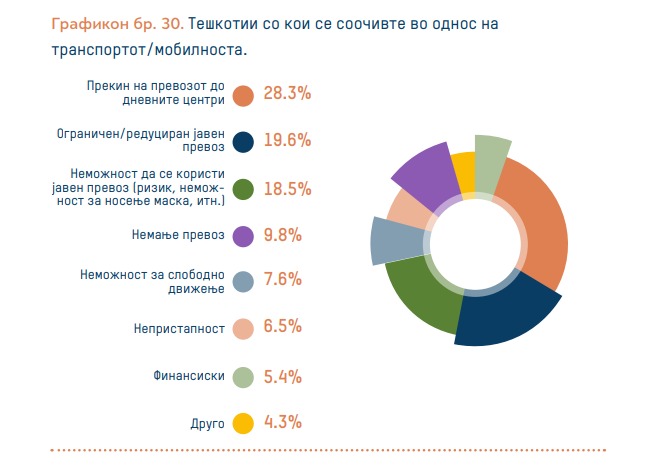 The publication concludes that the state has not complied with its obligations under the Convention on the Rights of Persons with Disabilities, in particular those relating to the active involvement of persons with disabilities and their representative organizations in policy and program decision-making processes; recognizing the importance of accessibility to the physical, social, economic and cultural environment, to health and education, and to information and communication. The state has neither acted appropriately to identify and eliminate barriers to accessibility nor has it taken all necessary measures for the protection and safety of persons with disabilities in risk situations, including emergencies.