We are reviewing a Facebook post in which a video was shared by a Russian bishop, who said that “global elites want to wipe out 6 billion people.” He adds that world leaders marched under the banner of transhumanism. The post we are reviewing adds that Russia is at a historic crossroads before deciding whether or not to accept vaccines and the transhumanist agenda.

The priest says that the only way to overcome this hellish agenda is prayer and fasting, emphasizing that prayer without fasting would not be enough. It is a brilliant sermon and is an ideal for what orthodox sermons should look like, says the author of the post.

The post includes a video from a sermon in the Russian Orthodox Church, in which the priest does not speak directly about vaccines. However, he does mention that there is a transhumanist agenda pursued by political elites who see themselves as God and that the goal is to eradicate six billion people from planet Earth. It is about the priest Porphyry, who, in previous sermons from July this year, claimed that Covid vaccines can distort the image of God and the image of humans. 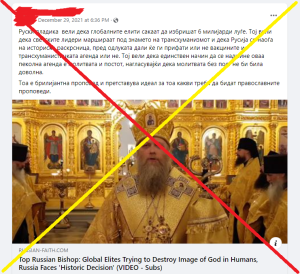 In that particular sermon, he also presented a series of disinformation, such as that vaccines are genetically modified, high-tech product that contains DNA proteins that when embedded in the human genome, modify and alter it.

At this point, too, the Christian responsible for their salvation must stop. We all know what genetically modified food looks like. A tomato, for example, looks like a tomato on the outside, but not on the inside. What is a genetically modified person or a person with a changed genome and to what extent the image of God remained unchanged in them and who can guarantee that this intervention did not cause irreparable damage to our image of God?, he said in a sermon shared on Russian orthodoxy channels.

The priest asks whether the man really remained an autonomous and sovereign person or whether the center of their control was transferred somewhere outside him.

What are the facts?

In covid-19 vaccines, there is no mRNA-modifying transhumanist nanotechnology, whatever that means.

None of the vaccines contain nanotechnology, much less transhumanism. It does not exist, said Mark Linas, a professor at Cornell University for Politifact.

Cindy Prince, a professor of epidemiology at the University of Florida, says transhumanism is a belief that technology can change and improve the human body.

There are people who believe we should try to transcend human biology and upload human consciousness to computers — but they are a fairly marginal group and don’t have anything to do with vaccine developers, in my knowledge. I have been vaccinated and can guarantee that the only modification I have is immunity to COVID-19, Prince said.

mRNA vaccines do not use nanorobot technology. The presence of nanoparticles in vaccines does not mean that they may contain small robots or computers.

After vaccination, people remain human! The person to be vaccinated remains a human being, just like the unvaccinated person. They do not become transhuman, whatever that means.

The mRNA from the vaccines does not remain in the human body forever, but is decomposed and the body gets rid of it in a maximum of 72 hours, as it is officially stated on the official website for vaccination in the country.

There is no evidence that people who have been vaccinated will be deprived of their human rights, neither now nor in the future, or that their “humanity” will change. This false claim is probably based on a misunderstanding of the science used in the development of Covid-19 vaccines.

In the Republic of North Macedonia, the leaders of all religious organizations appealed for vaccination and confirmed that it is not contrary to religious doctrines.

You will not become a genetically modified organism by being vaccinated, as falsely claimed in the post we are reviewing.

Unlike conventional vaccines, which use an entire pathogen or fragment, the mRNA vaccine involves injecting a small portion of the virus’s genetic code (DNA or RNA) to stimulate the patient’s immune response without any infection.

mRNA vaccines work by inserting an RNA molecule into the body, which causes cells to produce a protein that resembles one of the viral proteins that make up the Sars-Cov-2 virus. The cells then recognize the viral protein and generate an immune response to it, primarily by generating antibodies. DNA modification does not occur with these vaccines.

For the Associated Press fact-checking service, Dr Dan Culver, a pulmonologist at the Cleveland Clinic, confirmed that it was not possible for the mRNA vaccine to alter human DNA.

There is no evidence that the elites want to eradicate six billion people from the planet. The vaccines are intended to save lives from severe disease and mortality. Also in 2020, the world population was 7.75 billion and grew.

In 2021, according to Worldometer, there was even greater growth. The world population is expected to grow this year as well as next year.

Statistically, the number of inhabitants of the planet Earth is not decreasing, but growth is predicted to continue until the end of this century.