A post on Facebook misinforms that there are queues in front of the Bulgarian Embassy because Macedonians wish to return their Bulgarian passports. The title of the article, although containing a question mark, and the photo taken in front of the Consulate of the Republic of Slovenia in Banja Luka in 2018, both create a manipulation spreading on social networks and receiving great support. Such manipulations could incite hostility and damage state policies in relations with Bulgaria

A post appeared on Facebook, saying there is a queue in front of the Bulgarian Embassy in Skopje and people are returning their Bulgarian passports. This title contains a question mark, but being made in the form of a statement, not a question, is a manipulation. At the beginning of the post, there is also a question whether the Treaty on Friendship, Good Neighbourliness and Cooperation will be terminated. It is accompanied by a photograph showing a line of young people in front of a building and thus manipulating as if it were a photograph in front of the Bulgarian Embassy in Skopje. Such manipulation is incorrect, as is the photograph itself. The post has 1,700 reactions, 565 comments and 129 shares. 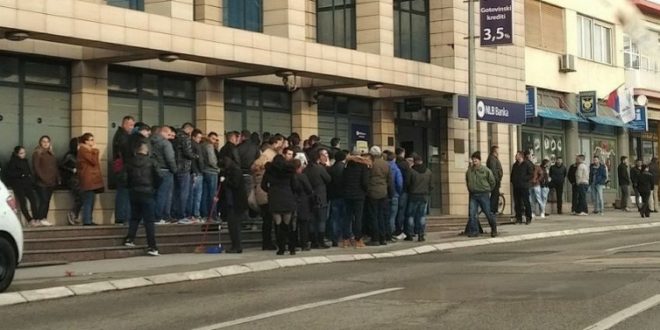 When you open the post, you will see it has nothing to do with either the title or the photo.

The article at the beginning conveys the views of the director of the “Prespa Institute”, Andreja Stojkovski, on the citizens’ perceptions of the Agreement with Bulgaria measured in a survey conducted for the needs of the Institute. The survey, as Stojkovski points out, showed that only 1 percent of Macedonian citizens see Bulgaria as a friend of our country. Only 23 percent of citizens had a positive opinion of the Treaty with Bulgaria, and 42 percent had a negative opinion.

The article further points out that the survey was also commented by the leader of GDU, Petar Kolev.

If this information is true, although I remain skeptical of possible manipulation, then only two logical moves remain: termination of the Treaty, which I expect its opponents to do through an initiated referendum with 150,000 signatures, which would not be difficult to obtain if only 1% of the citizens really consider Bulgaria a friendly country.

I expect long queues of Macedonians in front of the Embassy of R. Bulgaria in Skopje who, as a sign of hostility, massively return their Bulgarian citizenships and documents. I expect long queues to be led by politicians who believe that hostility and hatred are the future, followed by a series of journalists who are spokesmen for this cause.

I look forward to the events mentioned, if this survey is true.

The content of the article shows that there are no queues in front of the Bulgarian Embassy in Skopje for the return of Bulgarian passports. That is, in fact, the expectation of the leader of GDU, Petar Kolev.

The title of the article and the cover photo represent a serious manipulation spreading on social networks and receiving large support. Such manipulations can incite hostility and damage state policies toward Bulgaria.

This article was created within the framework of the Project to increase the accountability of the politicians and political parties Truthmeter implemented by Metamorphosis. The article is made possible by the generous support of the US non-profit foundation National Endowment for Democracy (NED). The content is the responsibility of its author and does not necessarily reflect the views of Metamorphosis, the National Endowment for Democracy or their partners.
banja lukaBulgariaconsulateembasypassportssloveniatreaty
0
Share FacebookTwitter
You might also like More from author