There Is No Textbook in North Macedonia Claiming There Are Only Three Races: Macedonians, Mongoloids and Negroids

There is no textbook with such content, written in Macedonian and German, used in the primary or secondary education curriculum, says the Ministry of Education and Science decisively

There is no textbook with such content, written in Macedonian and German, used in the primary or secondary education curriculum, says the Ministry of Education and Science decisively

Graphic textbook for the Macedonian sorosoids from Šišman, who want us to send the Republic of North Macedonia into the EU immediately and without any conditions. This is a Skopje textbook. How do their employers in foreign embassies view this racial theory?

“Truthmeter” addressed the Ministry of Education and Science of the Republic of North Macedonia for an official answer, whether, in the educational program for any grade of primary education or any year of secondary education, a textbook with such content is in use. We noticed that the statement of the MEP Dzambaski is supported by a photo from the alleged textbook, from which it is obvious that the text is written in both German and Macedonian. The controversial claim illustrated in this photo is that “there are only three blood groups and three races: Macedonians, Mongoloids and Negroids, and all the others are Mulatto.” 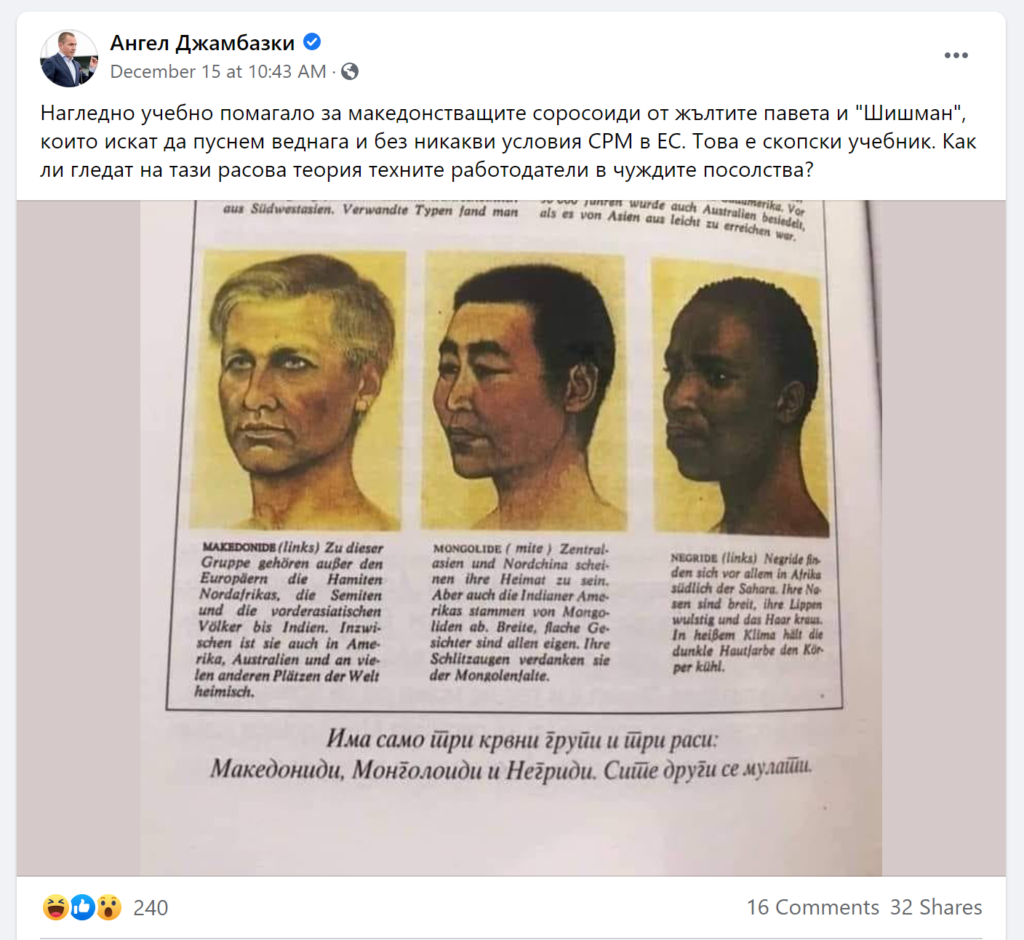 The Ministry of Education and Science is decisive:

There is no textbook with such content, written in Macedonian and German, which is used in the educational program for primary or secondary education.

With additional research, the “Truthmeter” team found that the book that the Bulgarian MEP Dzambaski qualifies as a textbook, is, in fact, a private publication, i.e. a book by the authors Risto Popovski and Angelina Markus, entitled “Philip II the Macedonian”.

The book is published by Edition Clea, printed in 2008 in 1,000 copies. As stated in the online edition available for download in PDF format, the book is sponsored by Zan Mitrev and the Special Hospital for Surgical Diseases “Filip Vtori”. On page 28 of the book, the illustration together with the claim that there are only three blood groups and three races, Macedonians Mongoloids and Negroids, can be found.

Therefore, we assess the statement of the Bulgarian MEP Dzambaski as false, because the book is not in official use in the Macedonian education system and it is not a “textbook”, as he claims. When the word textbook is mentioned, it means applied literature in the official education system of the country, which is not the case with this private publication.