Victim of Russian Attacks On Ukraine, Falsely Accused Of Being a “Transatlantic Press Artist”

The claim in the post that the cover of “DeMorgen” is false is not true. It is not true that this is fake news, fake photography and fake “artists” from the transatlantic press. These are real photos taken on the same day that Russia launched its invasion of Ukraine and hit a residential building in Ukraine where the teacher was a resident. The BBC further confirmed this by checking the photos, and found to have been taken on February 24, 2022, and not in 2018

We are reviewing a post published on the social network Facebook, in which a photo from the cover of the newspaper “DeMorgen” (a newspaper published in Belgium) is shared. The front page of this newspaper, which dates from February 25, 2022, features an injured woman with a bloody face and the headline reads “War in Europe” (Oorlog in Europa). 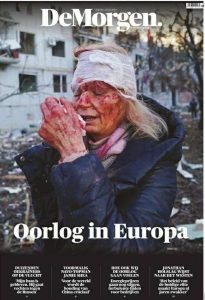 Sharing this cover page, the author of the post claims:

It is worth noting that in order to obtain all the details about the context in which this photo was published, is that in many foreign and domestic media, as well as on the social network Twitter, users claim that the photo in this post is actually old, and dates back from 2018.  Moreover, it is claimed that the same photo is falsely presented as dating from the Russian invasion of Ukraine.

This information was presented on at least two Facebook media profiles, but the posts were deleted before we wrote this review.

On Thursday, February 24, 2022, a residential building in Ukraine, in the eastern Ukrainian city of Chuguiv in the Kharkiv region, was destroyed after Russian President Vladimir Putin ordered an invasion of Ukraine. Other buildings on the street were also badly damaged, with broken windows.

The Anatolia agency published this and similar photos from the attack. Photos of the attack also appeared on the BBC.

Short videos of the attack on the settlement, on the first day of the Russian invasion of Ukraine, were also posted on the social network Twitter.

But shortly after the photos of the woman, who lived in one of the affected buildings in Chuhuiv, were released, accusations surfaced that the woman and the photos were not new, from the Russian invasion of Ukraine, but that they originated from a gas explosion in the Russian city of Magnitogorsk which took place in 2018.

In this context and in the post we are reviewing, the author claims that fake artists are photographed in the Western media.

However, the credible photo does not show any actress, but 52-year-old Ukrainian teacher Olena Kurilo, who after being accused of being an actress and falsifying bloody images from the building attack, publicly showed her wounds, even on video.

You can watch her video statement at the following link.

The video of Olena Kurilo’s statement in which she explains that the attack really happened, and her wounds are real, is not from the same day as the Russian attack on Ukraine, but from February 28. That is why she is dressed differently, and the bandage from her forehead is gone. 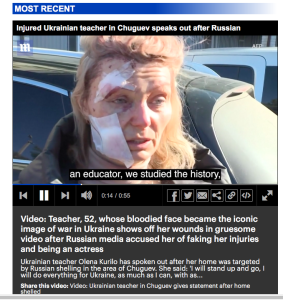 In the next video, she shows the wounds under the bandages.

Given all of the above, we assess that the claim in the post we are reviewing – that the cover of “DeMorgen” is false – is not true. It is not true that this is fake news, fake photography and fake, “artists” from the transatlantic press. These are real photos taken on the same day that Russia launched its invasion of Ukraine and hit a residential building where the teacher was a resident. The BBC further confirmed this by checking the photos and confirming that it was taken on 24 February 2022, not 2018.