West, East and I: “Pro-Kremlin Propaganda Disappeared After Four Editions in the Newsagent’s

The phenomenon represented by the magazine “West, East and I” in the country is not that rare. The first issue came out in October and the last one was already published last November. During important and key political and geo-strategic moments, including pandemic times, media and movements are established with only one purpose. They are current for a short period of time and then they either disappear or they become irrelevant. In this case we are talking about a short-term phenomenon and an example for a poorly conceptualized pro-Kremlin propaganda that managed to send to the newsagents’ only four issues and then disappeared

The phenomenon represented by the magazine “West, East and I” in the country is not that rare. The first issue came out in October and the last one was already published last November. During important and key political and geo-strategic moments, including pandemic times, media and movements are established with only one purpose. They are current for a short period of time and then they either disappear or they become irrelevant. In this case we are talking about a short-term phenomenon and an example for a poorly conceptualized pro-Kremlin propaganda that managed to send to the newsagents’ only four issues and then disappeared

In an era of closing printed media and the migration of the public to online media, it was interesting to notice a new printed media at the newsagents’. Last October you could have bought the magazine “West, East amd I” for 45 Denars.

The 16-page magazine, with circulation of 5.000 copies, at first glance seemed like a traditional printed medium. Various articles were inside the paper, but with only one narrative – the European Union was a fasist structure and did not want the Western Balkan countries to join. One could have read clearly expressed positions against extending any kind of support for Ukraine, as well as a cheering attitude towards Russia and Turkey, presenting both countries as friends and powerful allies with whom North Macedonia should join forces.

On the cover page, right below the title of the magazine, in small print, reads:

Classified in the genre SCIENCE FICTION. It will cover national and international affairs and because of the perverse retardation that has infected the whole World, it is impossible to classify it in any other way. Well now, it will be SCIENTIFIC for the people because the people will be able to see the real picture of the global affairs  such as – who is heroicly fighting, who is lying, who is stealing etc. People will be able to learn things that no-one wants to talk about. It is SCIENCE FICTION because the interpretations and the analysis of global affairs by some fictional characters in science-fiction events are not subject to criminal responsibility for spreading disinformation, slander and hatred. The character will be imaginative since people do not believe in heroes any more.

With such a statement – in a way – the creators of this medium seem like they are displaying some kind of awareness of the fact that the contents is full of disinformation and hate speech, but to elude criminal and moral accountability, the magazine is somewhat of a satire, although the characters depicted within are real.

This tactic is quite frequent for disinformers – and is nothing new – trying to convince the public that their false information without being held accountable for that. It is also very probable that someone might buy the magazine without noticing this statement, thinking that he/she is reading a serious newspaper with checked facts.

But, how much facts can this medium contain?

By buying all four issues of the magazine published, we realized that the contents was taken over from web portals or statements made by politicians, while the author, signed as М., was giving his/her opinion about the title or article that someone else previously published.

What follows is something that cannot be placed in any journalistic genre because the opinions – more precisely, posts – of Facebook users who wrote them without any shred of evidence or facts. Analyzing the contents we came to the conclusion that all so-called news are comments of only one person, i.e., the whole magazine was the product of just one person. The contents was, mostly, conspiracy theories such as: “they are stealing our history”, “climate change is imaginary”, “the West is the personification of the devil”, as well as pro-Russian positions supporting the military invasion of Ukraine. The glorification of Vladimir Putin was the common demoninator of all four published issues.

In the section “From the Treasures of the European Parliament”, one could have read that the EU was led by “a bunch of idiots”, extreme hypocrits and cheaters that gave false hope to Ukraine and Moldova for joining the EU. A large part of the contents of this magazine was devoted to the protests against NATO, the EU and the sanctions against Russia.

Noticeable was the fact that quite a large number of articles were taken over from Serbian portals, but also from the Macedonian portal Kolovrt. The contents from Kolovrt are frequently subject to fact-checking by Truthmeter due to the spreading of disinformation and conspiracy theories – for the Covid pandemic, vaccination, but also for the Russian military invasion of Ukraine.

“West, East and I”, unlike Kolovrt, had an Impressum. Makmir DOOEL Skopje was the publisher, while someone called Monika Manevska  was the director. According to the data of the Central Register, the company Makmir was established last August with a monetary investment of 5.000 Euro. Manevska is also the owner of the company.

Towards the end of November, the Facebook page of “West, East and I” published that the fourth issue of the magazine will not come out. The reason for that was that in many sales outlets the magazine was apparently hidden.

The next issue of our unique Macedonian by-weekly magazine on geo-politics will not come out due to the typical Macedonian “technical obstacles” of street-wise nature!

It was not enough to keep the magazines on many sales outlets completely hidden and to have many people complaining that they could not find them, now we are facing “technical obstacles”! Therefore, here we will publish all the information that you should have, all the news, all the things hidden from you and much more…, wrote the editorial.

Ever since the content is shared only on Facebook. There one can find titles such as: “THE DEMAND FOR NOT VACCINATED BLOOD IN THE WORLD RISES!”, or “CANCER EXPLOSION IN PATIENTS AFTER VACCINATION AGAINST COVID-19” and many other anti-vaccination, anti-EU and pro-Russian narratives, mostly taken over from Serbian media under Kremlin influence.

By the way, many of these articles have been marked by Facebook for ”containing links that are fully or partially under the editorial control of the Russian Government”. 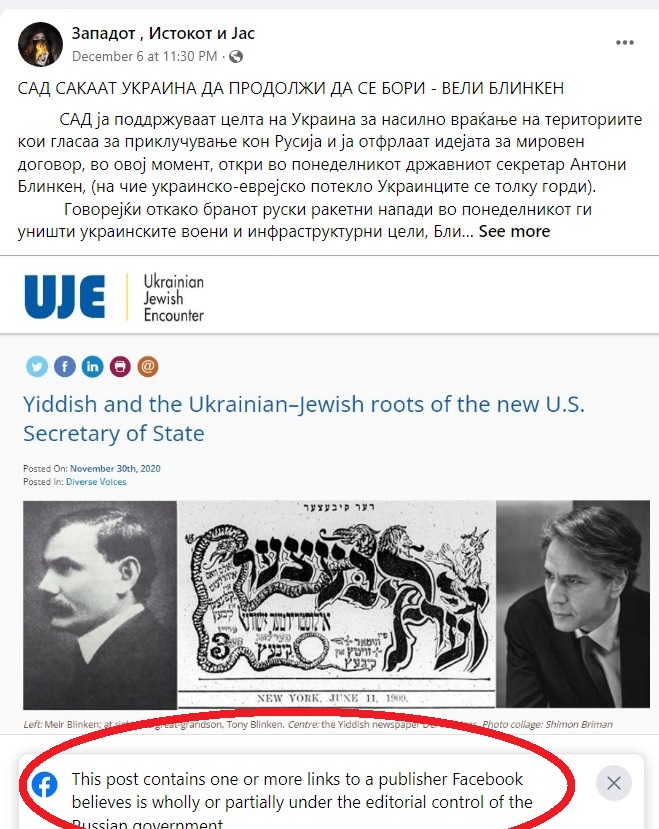 The phenomenon represented by “West, East and I” is not that rare in the country. So, during important and key political, geo-strategic affairs, including pandemics, media and movements such products are established with a sole purpose. They are maybe current for a short period of time and then they either disappear or become irrelevant. In this case we are talking about a rather short-term phenomenon and an example of a poorly conceptualized pro-Kremlin propaganda that managed to send to the newsagents’ only four issues and then disappeared.

This article has been produced within the project Promoting Access to Reliable News to Counter Disinformation, implemented by the Metamorphosis Foundation. The article, originally published by Truthmeter,, is made possible by the support of the American non-profit foundation NED (National Endowment for Democracy). The content of this article is the responsibility of the author and does not necessarily reflect the views of Metamorphosis, NED or their partners.